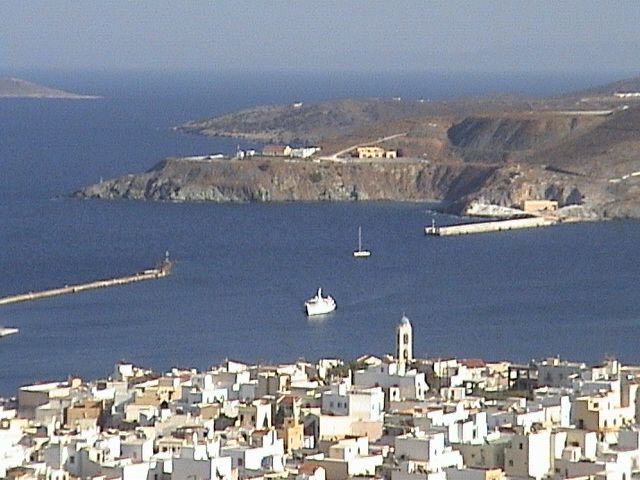 Getting to Syros
Syros, the capital of the Cyclades, is well served in summer by frequent ferry boat taking 3 1/2 hours or High-speed catamaran taking 2 1/2 hours from Piraeus . There is also a 20 minute domestic flight to the island from Athens a couple of times a week.

A Brief History of Syros
How Syros got its name is not absolutely certain but it is thought to mean "rocky place", its appearance from afar. It has a long history and deep cultural roots
The island was first inhabited around 2800 BC. From the 8th century BC it has been ruled amongst others by Phoenicians, Samions, Venetians and Ottomans.
After the Greek War of Independence it became a refuge for Greeks fleeing persecution from the Turks. Many settled in Hermoupolis and as a result Syros became a very wealthy and successful place thus becoming the main port of Greece before the building of Piraeus. Hermoupolis is named after Hermes, the Greek god of commerce.Today it is the capital of the Cyclades.

Hermoupolis is one of the few "neoclassical" towns of Greece. Building began during the revolution of 1821, by refugees who came from other parts of Greece such as Chios, Psara, Kasos, Asia Minor, Crete etc. The town has very interesting architecture. Impressive old mansions made from marble built at the edge of the sea, streets with flat stone paving, monuments and its' hidden beauty will surely catch your eye as you are wandering through the narrow streets. Needless to say, all this has given Hermoupolis the name "the noble lady of the Aegean sea".

Worth seeing is the imposing building of the town hall situated in the central Miaouli square. It was designed by Ziller, the famous Bavarian architect. It's the most magnificent town hall of Greece and one of the most remarkable neoclassical 19th century buildings still standing in Greece. A number of marble columns and a broad marble staircase dominate the interior. Apart from the municipality other local offices are also housed there.
The museum is also situated whithin the same building. There are a number of items exposed from Syros and other places, dating from the early cycladic civilization (±2400 BC)
The Apollon theatre is also worth seeing. It bears similarity in structure to the famous "Skala" of the Milan theatre. In it's glorious past many famous artists performed there.
In the church of the Assumption of the Virgin Mary has the homonymous icon been found. It is a work of the famous painter El Greco (Domenikos Theotokopoulos)
One of the largest and most beautiful in Greece Miaouli square is marble slab laid and surrounded by the town hall, the cultural centre and other impressive old buildings. There are also many coffee shops and restaurants set under the tall palm trees. Also in the square is the round marble bandstand of the towns' philharmonic band surrounded by relief panels of Apollon and the nine muses.